Laminated Veneer Lumber, LVL has been on the market for many years but was typically used as a framing integration product for stick frame houses. LVL has now been expanded into new production capabilities and can be used for large beams, columns and even panels. These large scale LVL products are available in Europe, Australia, New Zealand, and Canada.

Laminated veneer lumber’s (LVL) first appearance was around the second World War when aircraft pieces were needed to be both lightweight and strong such as for propellers. LVL made its entry as a structural framing material in the 1970s when it was used as the chords of trusses combined to a steel web. This product offered a higher strength to weight ratio compared to traditional all-steel trusses. In order to offer a 100% wood product, LVL flanges were combined to a plywood web. Truss joists, also known as TJIs or I-beams, were thus invented for the residential market. The arrival of this efficient building material coincided with the increasing lack of large pieces of sawn timber, which further propelled its popularity. ​

​The process of manufacturing laminated veneer lumber (LVL) generally follows the manufacturing steps as depicted in Figure 1. The log is debarked and is then conditioned in a hot bath for an efficient veneer production. Veneer sheets, varying in thickness from 2.5mm to 4.8mm, are formed by rotating a log on a veneer lathe, and typically measure 2.4 to 18.8 m long by 0.6 to 1.2 m wide. A dryer is then used to reach a target moisture content varying between 6 and 10%. Defects that have an impact on the strength of the dried veneer sheets are trimmed away before grading the sheets, which can be done using ultrasonic testing. After an adhesive is applied to the top face of the sheets, usually phenol-formaldehyde, they are piled up so that end joints of each sheet are staggered along the billet. Consequently, the end joints’ influence on strength is greatly reduced. Those end joints can be either butt, scarf or finger joints. As an alternative, the individual veneer sheets may be overlapped to allow a proper load transfer. The mat then goes through a continuous press that applies pressure and heat to compact it and cure the resin. Finally, the billets are ripped and sawn to the required widths and lengths, which typically correspond to framing pieces such as beams. However, certain manufacturers produce formats of LVL that correspond to panels rather than framing members. The species for LVL production commonly include Douglas Fir, Larch, Southern Yellow Pine, and Poplar, while Lodgepole Pine, Western Hemlock, Red Maple, and Southern Pine may also be used though less frequently.
Cross-banded LVL, a variation of LVL, respects the same manufacturing steps described above, with one or two of the veneers having the grain running perpendicular to their longitudinal axis as opposed to running parallel to it. 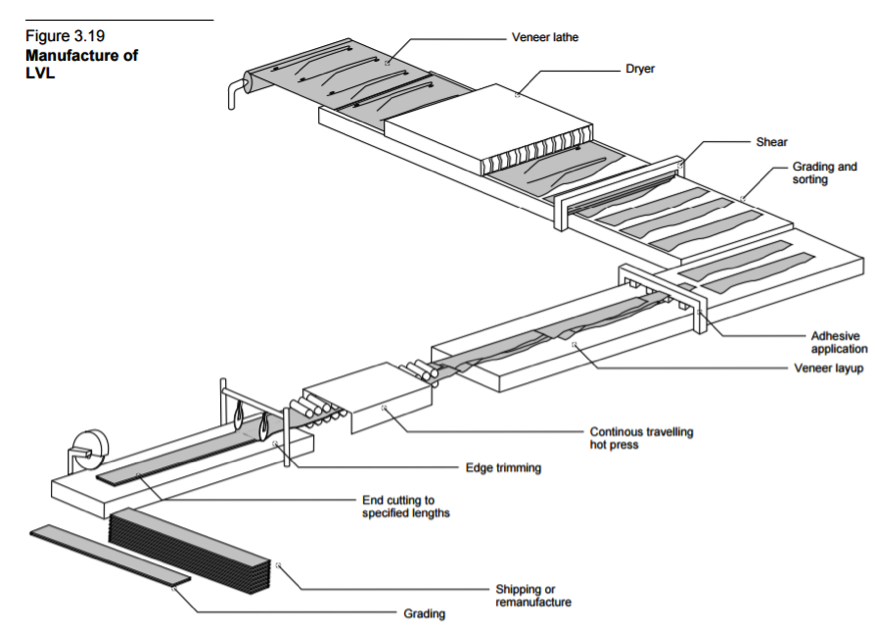 LVL is used for its high strength properties in many different applications and for all types of construction as a replacement of sawn timber - it can be manufactured to the desired dimensions and has a higher dimensional stability. LVL’s high stiffness also makes it a great alternative to sawn timber for long spans. For example, it is commonly used for structural framing elements such as beams, joists, rafters, purlins, and headers over window and door openings. LVL may also be used as components of built-up elements, such as for the flanges of I-joists or chords of a truss. If used with an emphasis on its aesthetics, architectural grade may be selected, which results in a more finished product that can be left exposed.
LVL panels are used for load-bearing applications such as for roofs, floors, and walls where diaphragm action may be required. Due to its high stiffness, the panels are a suitable option for cantilevered spans. Working platforms on scaffolding is another common use of LVL planks. In applications where LVL is used for its aesthetics, LVL beams can be assembled next to each other to create a panel while displaying the veneer end grain as seen in Figure 3.
In applications where shear stresses govern over bending stresses, cross-banded LVL may be used as an alternative to regular LVL. Such situation would typically occur for beams that are both short and deep. Cross-banded LVL may also be used for members that would likely experience splitting along the grain due to bending stresses occurring at an angle to the grain such as for curved members. Cross-banded LVL may also be suitable for elements that are expected to experience great moisture content variations for additional dimensional stability.
-D.H. 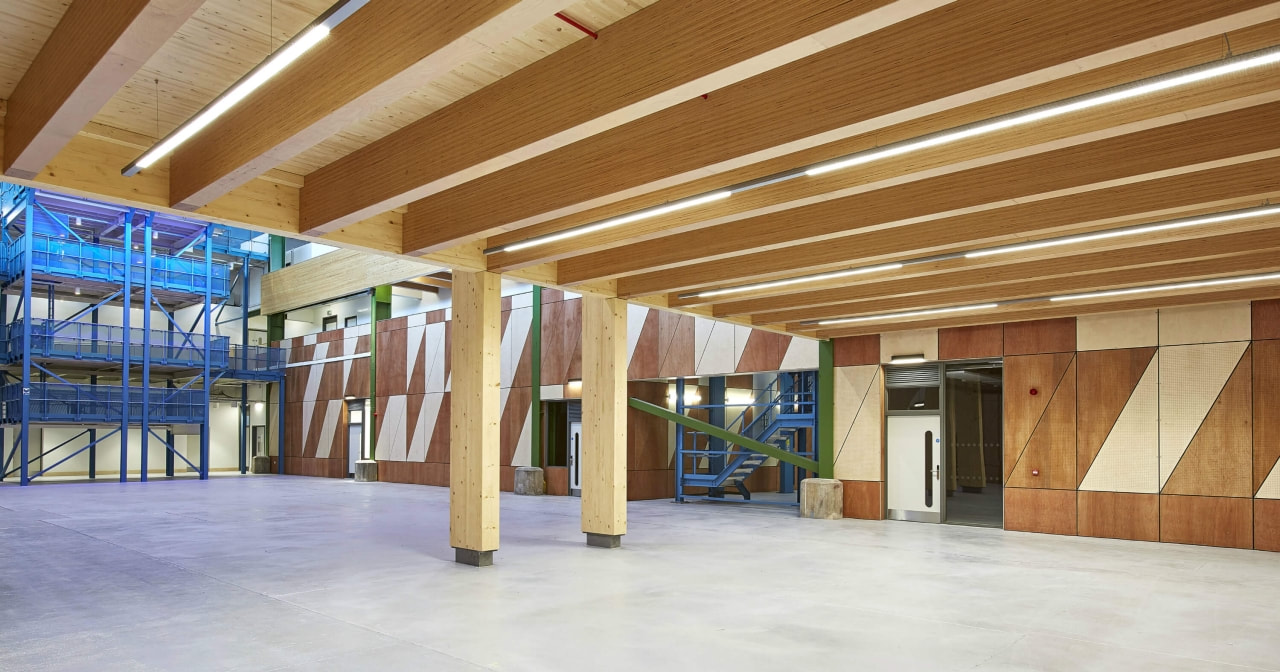